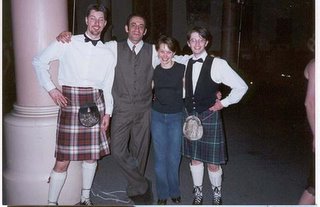 Bassel Nadim studied an MPhil in Monetary Economics and Finance at the University of Glasgow between 2001 and 2002. Here he tells of his experiences in the city, and how the Chevening scholarship will help him in his future career in economics.

Just last year I was counting down the days left to be in the UK. I dreamed, imagined, got excited, planned ahead, but the something I did not think about is how gorgeous my experience here would be, indeed, it was more than what I have expected. Glasgow is a cosmopolitan city, it combines heritage with modernization, culture with business, nature with civilization, change with variety, and maybe more importantly, people with people. Glasgow surrounded me with a unique feeling of warm and friendship. I have never felt myself a stranger.

Social life in Scotland is second to none, both Glasgow University International Student Scheme and Host UK programme opened a chance for me to make further contacts with local Scottish families. I still remember with gratitude the hospitality I got by the Glaswegian families, and the nice Christmas days I spent in Inverness. I enjoyed delicious meals, understood Scottish life and introduced some awareness on the oriental culture.

Equally important were the two chances provided by the British Council in Glasgow and the Rotary Club in the area, it was extremely useful for me and other scholars to get the hang of people's points of view, discuss global issues, and mutually communicate with the area's MP. How could I forget the great weekend hosted by the Rotary Club in Girvan on the Irish Sea, or the spectacular Lochs and the Highlands.
Cutting-edge research in Scotland
Back to the University life. Despite the desirable academic pressure, it was extremely comprehensive. Glasgow University is one of the best ever - the 550 year-old university manifested itself not only on the splendid ancient architecture, but also on the knowledge accumulation my university contributed in, which started even before Adam Smith and James Watt. And while it has not been finished, it is at the cutting edge IT research and e-intelligence implementation. However, the university is still committing itself for further outstanding research and education. It generated almost £250m recently, and placed 17,000 full-time students.

Consider, for instance, my department -The Centre of Development Studies - that attracts distinguished academic staff and speakers to teach high quality courses adopted for developing and transitional countries. It is a sign of excellence that my course is tailored for monetary and finance issues in developing countries where only proven economists are able to approach. Furthermore, in the closed city, Edinburgh, the Roslin Institute cloned Dolly the sheep, the most argumentative scientific achievement in contemporary history.

On the professional side, the Scottish Executive, the devolved Scottish government, throughout its bodies and schemes, organised a score of business-oriented events. I contributed more than once in their activities and grasped practical benefits.

Certainly, the knowledge and skills I gained will positively affect my performance, providing further economic advice and conducting more sophisticated consultancy assignments at higher levels and according to international codes. I hope I can create further improvement in the Syrian economy and enhance its steps towards partnership with the EU.

Finally, I would to thank friends, the university staff, the Scottish Executive, and the British Council in Syria and United Kingdom for their support, encouragement and care.